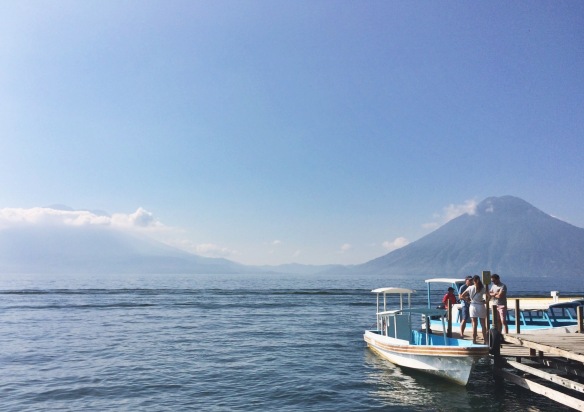 Well we had quite the incredible week in Panajachel near beautiful Lago Atitlan; about 3 hours away from our homes in San Juan.

This lake that Pana rests by is known to draw many people who feel lost and are searching to find something – anything. Pana is known as the “Hippie Capital” of Guatemala.

In Pana, we stayed with and worked with an organization called Porch de Salomon. And wow what amazing work Porch is doing there. From music ministry to being a food bank, they seem to do it all. And this past week we got to be a part of their home building ministry.

They build about 12 homes a year, multiple at a time, and we had the incredible opportunity to start one of those houses. And another super cool part of that was that we got to start the partnership that Porch was making in the rural indigenous community that we worked in; it was their first time ever building there.

(This is normally something that short term mission teams would be doing so it was a bit of a different feel for us but the same idea for the people from Porch who were leading us.)

So because of this being their first time in this village, they encouraged the relation side of the project, the being, rather than just the doing (more than usual). And I especially loved this about them.

We met the mom and her son who were living in extreme poverty and right away she welcomed us as her family for the week. I saw Jesus so much in her. And her son, 6 years old only, was so small but had incredible amounts of energy.

And as for the doing, we had the chance to do some of the things that are very necessary for the building of a house but things that would take weeks for the few workers to complete on their own.

So since we aren’t actually qualified like they are and we also don’t want to take paying work away from them, we moved supplies including cinder blocks, sand and gravel, as well as dug trenches for running water and the foundation. Some of us also bound rebar contraptions for the walls of the house and also dug a very deep hole for the septic tank.

By the end of the week I was feeling quite exhausted but also so incredibly blessed. The workers appreciation as well as the appreciation of the woman, who’s house this is going to be in 8 weeks, was amazing.

What a beautiful week of being reminded how all we really need is Jesus and also what it looks like to rely on Him for everything (for most of us that mean physically for the week).

We also got to appreciate what it meant to be back in community since we were back together once again.

And as we are feeling so blessed, we aren’t meant to keep that for ourselves but instead share it with others.

Although this was just one week out of our months here, I’m hoping to allow it to continue to impact the rest of our time as well as the rest of my life and how I view short term mission trips.